Etosha Fishing, proud Namibian home of the iconic Lucky Star canned pilchard brand, has ensured additional employment for 650 seasonal workers for an estimated 3 weeks during the month of March through the processing of imported, quality frozen pilchards. Another 20 weeks of employment would be created during the course of the year with a remaining estimated 13,000 tonnes still to be imported.

Says Etosha Fishing MD Pieter Greeff: “We have been importing frozen pilchards for processing on local soil since 2010, which has tremendously contributed to the creation of additional local jobs”. According to him, the company has imported more than 20,000 metric tonnes of frozen pilchard since 2010, amounting to more than 40 weeks of additional employment for seasonal workers during the 2010 to 2014 period.

“With our own pilchard resources under threat, Etosha Fishing has taken an alternative approach to ensuring the sustainability of Etosha Fishing and the sustainable development of our industry,” says Greeff. According to him, their total allowable catch (TAC) of pilchard and horse mackerel only provides employment for about 4 months, from about April to July.

“We cannot afford to have our processing plant sit idle for the remainder of the year. Instead we are importing great volumes of whole round pilchards and cutlets to add value to in our country, which translates to employment for nearly the entire year,” says Greeff. Through these imports jobs are extended beyond July to at least November.

He highlights that this innovative business thinking is not only directly in line with the government’s directive of value addition to our local marine resources, but further contributes to job creation and extension as well as the sustainable development of the local fishing industry. This clearly supports the government’s Vision 2030, specifically in terms of job creation and improving the quality of people’s lives to the level of their counterparts in the developed world. 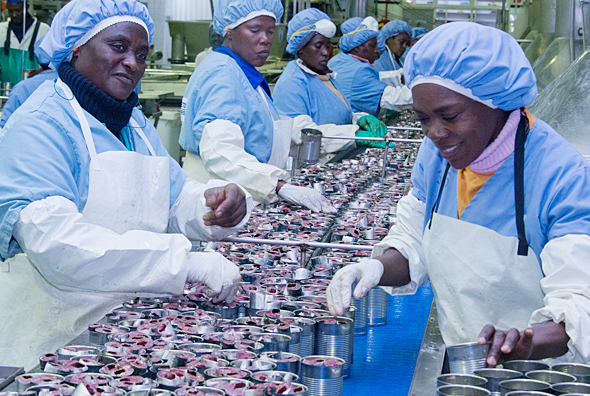 Greeff notes that during their period of employment, seasonal workers are not only paid a basic wage, but also enjoy benefits such as overtime, pension fund, housing allowance and a production bonus. Furthermore, the local economy of Walvis Bay receives a trade injection of roughly N$4 million per 1000 tonnes of frozen pilchard through wages and services procured in the town. “This means that roughly N$8 million will be spent in Walvis Bay during March as a direct result of this import,” he notes. This translates to a total of N$60 million that will be injected into the harbour town’s economy during the course of 2015 based on the total of 15,000 metric tonnes planned for importation this year.

Established in the 1940s, Etosha Fishing Corporation is a leading player in the Namibian fishing industry and considered to be one of the foremost round can production facilities in the world. The company subscribes to the vision "excellence in food processing" and operates under HACCP compliance and EU Accreditation. Products also comply with National Regulator for Compulsory Specifications (NSRC) and Namibian Standards Institution (NSI) regulations and standards.

Photo caption: The reefer container, Novaya Zemlya, arrived in Walvis Bay harbour on Monday, 26 January to offload an estimated 2000 metric tonnes of whole round frozen pilchards to be processed and canned at the Etosha Fishing processing plant in Walvis Bay under the iconic Lucky Star brand. The finished product will be exported to South Africa.

Goodness from the sea